How Many People Can Be at Fault for a Pile-Up Accident?

There is no definitive answer to this question as each accident is unique, and the circumstances surrounding it will vary. However, it is possible for multiple people to be at fault for a pile-up accident. This could include driver error, defective brakes, failed road maintenance or inclement weather. Ultimately, it is up to the investigators to determine who was at fault and how much blame each party deserves.

Note that New York is a no-fault car accident state, and each person in a collision can turn to their insurer to receive compensation. Sometimes, the damages paid to an injured person are insufficient to cover the medical care and lost wages. In such cases, the person can go outside the insurance system and file a lawsuit if certain factors are met. This can include amputation, fractures, disfigurement or an injury that keeps the person from working for 90 days or death.

Difference Between a Chain-Reaction and Pile-Up Accident

While many believe that they are the same, these types of crashes technically are not. Chain-reaction accidents are most often caused by rear-end collisions. When one vehicle hits another from behind, it can cause a domino effect that leads to multiple cars being involved in the accident. A pile-up accident can happen if the initial impact is severe enough to push the leading vehicle into oncoming traffic or if it causes the car in front to lose control and spin out. This causes multiple vehicles to be involved as other drivers crash into the initial collision. Large trucks, wrong-way drivers and slippery roads account for most pile-up crashes. In some cases, a chain-reaction accident can turn into a pile-up as described above.

Who is at Fault?

Finding out who is responsible for a chain reaction or pile-up accident can be difficult, as there are often multiple factors that contribute to the crash. In some cases, all of the drivers involved may share a degree of blame. For example, if everyone were speeding or not paying attention, it would be difficult to assign blame to just one driver. However, if one driver rear-ended another and that led to the chain reaction, that driver would likely be considered at fault.

How is Liability Determined in a Pile-Up Accident? 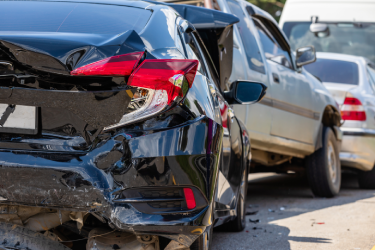 It is possible for multiple people to be at fault for a pile-up accident. If the driver entered the road traveling in the wrong direction, they would be responsible for a pile-up accident if it ensued. But what about poor road or weather conditions that contributed to the accident? Poor roadway conditions are often the fault of inadequate maintenance by a government agency.

The injured individual can file a claim against the agency if that is the case. When filing such claims, it is essential to remember that the time limit to file differs from other personal injury cases. A personal injury lawyer will ensure that all documents are filed correctly and on time. If the claim is not filed in time, the matter will not be allowed to proceed. Poor weather is another case. For the most part, drivers should adapt to inclement weather by slowing down or motoring with extreme caution. If not, the driver may be at fault. Ultimately, it is up to the investigators to determine who was at fault and how much blame each party deserves.

Is the Rear Car Automatically at Fault in a Chain-Reaction Accident?

The rear car is not automatically at fault in a chain-reaction accident. There are many possible causes for a chain-reaction accident, and multiple drivers might be liable for causing it. Each case is unique and will be investigated on its own merits. However, if the rear car hit the leading vehicle from behind and that led to the chain reaction, the rear car would likely be considered at fault. The question then is would the driver in front also be at fault? Possibly. Let’s say the driver did not have functioning brake lights and the motorist to the rear did not realize the vehicle had stopped. Then the lead vehicle’s driver would be partially to blame.

What to Do After a Chain-Reaction or Pile-Up Accident

If you are involved in a chain reaction or pile-up accident, the first thing you should do is stop your vehicle and turn on your hazard lights. If possible, move your car to the side of the road so it is not blocking traffic. Once you have done this, you should check yourself for injuries and call 911 if necessary.

When the police arrive, they will likely want to speak with all of the drivers involved in the accident. They will also want to collect any evidence that could be used to determine who was at fault. This could include witness statements, photographs of the scene and footage from security cameras or dashcams. You should exchange insurance information with the other drivers involved. You should also notify your insurance company about the accident. Once you have done this, you can begin filing a claim and seeking compensation for your damages.

To better understand how pile-up accidents can happen, let’s take a look at some hypothetical scenarios:

You are stopped at a red light when the car behind you rear-ends you. The crash’s impact pushes your car into the intersection, where it is hit by a passing vehicle. This causes a three-car pile-up. In this scenario, the driver who rear-ended you would likely be considered at fault for the accident

You are driving on an icy road when you lose control of your car and spin out. As you are spinning, you hit the car next to you. This causes that car to spin out as well. The car behind you hits both of you, causing a three-car pile-up. In this scenario, all drivers may be considered at fault for the accident if negligence is involved.

If you were injured in an accident, you might be entitled to receive compensation for damages. An experienced personal injury lawyer can help you understand your rights and options and fight for maximum compensation.

PrevPreviousCan Your Age Affect Your Settlement Amount After a Car Accident?
NextHow Does Having a Child Passenger Affect Your Motor Vehicle Accident Case?Next