This law plays a key part in preventing scaffolding accidents on construction sites. Owners and contractors face civil liability if they violate this law. This law protects construction workers exposed to height related risks when they are performing one of these enumerated activities:  erection, demolition, repairing, altering, painting, cleaning or pointing of a building or structure.  For most of those activities, it is clear what the statute is referring to.  For example, there is no ambiguity as to what constitutes demolition work.  However, there has been much litigation into what constitutes a “repair” in construction accidents under the scaffold law.

The Courts have long held that the accepted meaning of the word “repair” does not necessarily reflect the statutory meaning of the word “repair” as it relates to Labor Law §240.  In fact, the Courts have held there is a clear distinction between what qualifies as a repair and what qualifies as mere maintenance. Construction accidents that qualify as maintenance would not be protected under the scaffold law.

The Factors of Repair Work

Over the years, the Courts have considered what constitutes a repair as opposed to routine maintenance in construction scaffold law accidents. They came up with a series of factors, including:

–  whether the item being repaired is inoperable

–  the length of time and manpower required to complete the job

–  whether the task was part of an on-going construction project

There have been some interesting recent cases regarding this issue.  In a recent Second Department case, a worker sustained an injury while performing work replacing bulbs and ballasts/transformers. He did this in 78 overhead light fixtures.  The worker’s employer provided seven or eight workers. They were led by a team foreman to perform the work.  Thus, the Second Department held that in view of the overall scope of the job, the individual task involved in the construction accident (replacing a transformer) constituted a repair under the scaffold law. 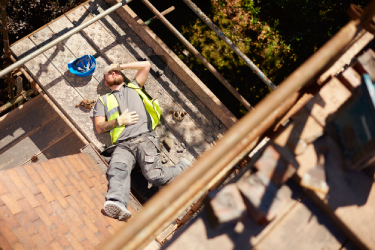 In a recent First Department case, plaintiff worked pursuant to a contract in which his employer had agreed to “inspect and maintain” an electrical sign.  The worker fell from a ladder while he was replacing a power supply box. He had previously done this on at least ten prior occasions.  The First Department dismissed the worker’s claim. They held the work he was performing at the time of his construction accident was routine maintenance and not repair work as protected under the scaffold law.

In another recent First Department case, a worker sustained an injury while performing work replacing parts on the Gownaus barge.  The contractor’s job on the barge lasted several months.  The Second Department held that there was “nothing routine about this work” as this was a massive project. Because of the scope of the project, the court said the construction accident qualified as repair work protected under the scaffold law.

As demonstrated above, the specific details your work is crucial in determining whether your construction accident qualifies as a case under the scaffold law.  While we hope you are successful in preventing scaffolding accidents on construction sites, if you sustain an accident, contact the personal injury lawyers of The Platta Law Firm today.

Get a Free Case Evaluation