It took the jury of Kings County Supreme Court about an hour to determine the outcome of one of the biggest construction cases of 2022. Dariusz H., a Polish immigrant, was the victim of a near-fatal fall from a height-related construction accident back in 2016. Though it didn’t kill him, it inflicted severe spinal injuries requiring multiple surgeries and disabling him for life. After a lengthy battle for his feeble health and constant pleads for compensation, his legal team secured an unprecedented $47,968,838 verdict.

This accident was caused by the negligence of one of the contractors, improperly placing a temporary wooden staircase for the workers to use on site. On the day of the accident, the staircase was improperly moved and not secured, unbeknownst to Dariusz, who stepped on it and caused the floor to collapse beneath him. He sustained dramatic injuries as a result, deeming him a tetraplegic for life.

Dariusz was represented by The Platta Law Firm, PLLC with trial counsel, Slawomir Platta, Esq., Howard G. Frederick, Esq. and Michael Taub, Esq. The case was tried before a jury of six members and the Honorable Wayne P. Saitta. The verdict was unanimous on all categories of damages listed below.

Breakdown of the Verdict: 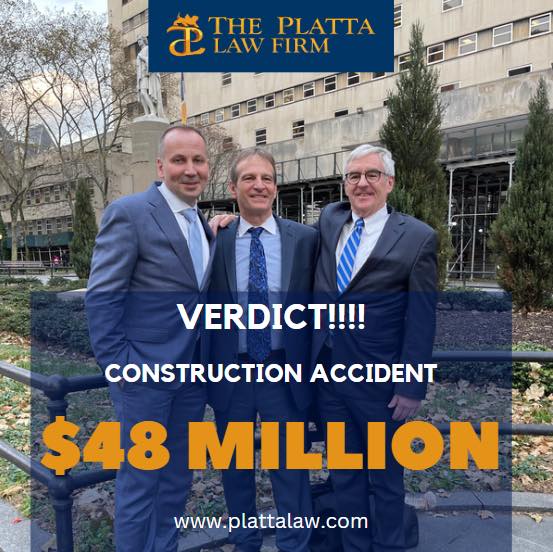 “Most construction companies flaunt their standards of safety but fail to even meet basic OSHA Regulations. This is not only negligent, but borderline illegal. We aren’t going to let them get away with anything. We will stand up for every worker that suffers as a result of a construction accident,” said Slawomir Platta, Esq. after leaving the courtroom.

New York construction accidents and work-related injuries are on the rise again, after a somewhat short hiatus during the 2020-21 pandemic.

The boom in New York City real estate is an urgent call for stricter protection of laborers in New York State.

PrevPreviousHow Does Shared Fault Affect the Value of a Wrongful Death Claim?
NextThe Most Dangerous Construction Materials Found in BuildingsNext